It's funny how things turn out.

I've been getting some fishing in on the waters of my local angling club (which as I mention elsewhere, I co-founded, so I'm rather invested in the quality and appearance of these ponds) and I'm pleased to say that they haven't disappointed: they look great, and there are still decent-sized fish in them. I just need to catch them.

And my anxiety about the possibility of the club's stocking policy being dictated by the preferences of the match anglers in the club, who are generally interested in quantity rather than quality, hasn't been borne out.

All good, then. Better, my buddy Mark (who fell out with the club and its committee at the same time and for the same reasons as me), has rejoined too. His kids - a 10 year old boy and an 8 year old girl - have taken to angling like... ermmm... ducks to water, and they're great company.

But for longer than I've been an angler, I've been a guitarist - and, on the right day, a very good one, in a Joe Satriani, Steve Vai, Steve Lukather (along with loads of other guitaristic influences and inspirations) sort of way.

I've gigged and recorded, and was, in my day, seen as One To Watch. But the music industry is particularly replete with liars and bullshitters, and after going through one "promise you the Earth if you just sign here..." screwing-over too many, I gave up on my aspirations to become a pro.

But doing something guitaristically is an itch that never really goes away, and I've recently found myself drawn in by several players (Nick Johnston, Stig Trip, Mateus Asato) who all have one thing in common - stepping away from heavily overdriven "rock" guitar sounds, to a much cleaner, chimey, just-on-the-edge-of-breakup single coil sound which I'm finding utterly engaging.

And - I've realised - likely to suit my playing style, fingers, and the ideas in my head, better than the "cranked" tones I've hitherto aspired to (with, I must admit, limited success sometimes).

So to that end, something very strange happened recently. I am, at the time of writing, an hour or two away from taking delivery of this: 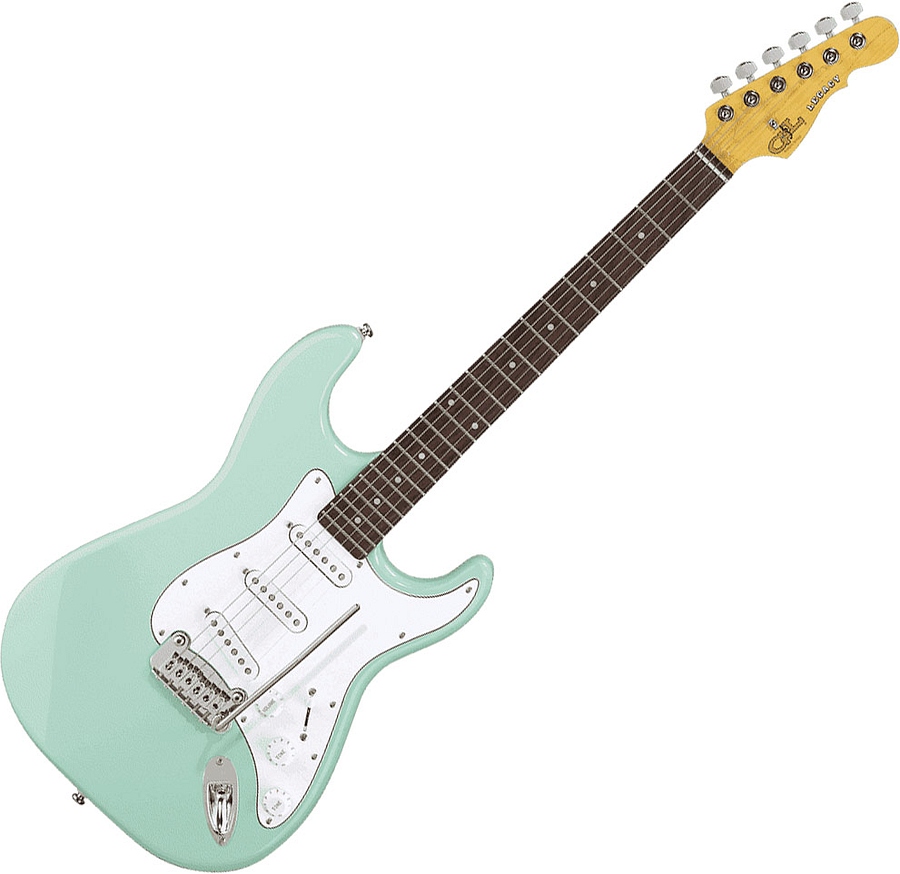 A G&L Tribute Legacy, no less. Yep, single coil pick-ups all through, on what is essentially a Strat to look at - a first for me in 40-odd years of playing.

It's not as Strat-like under the cover though - jumbo frets, flatter fretboard (in a wood called "Brazilian Cherry", more properly Jatoba), some clever wiring trickery under the Tone pots to provide separate treble and bass roll-off - but the key things for me are the capable trem system (I'll likely be adding locking tuners to the guitar to enhance its performance); highly-regarded alnico V pickups; and greenness...

This last is actually a "thing" for me.

I still remember the first-ever electric guitar I (nearly) had: I was about 13 years old, and my folks and I were in a second-hand shop on the outskirts of Newcastle to buy my first electric.

On the wall was a pale green Strat copy, and I instantly fell in love with it. It must have been beyond my parents' spending power though, as I ended up with a vile Woolworths "Audition" guitar instead.

I still remember the price of that thing: £11.50. A quality item it was not, for all it got me started.

The mental image of that green "Strat" has lingered ever since, and I've finally got round to scratching that itch too...

This is all just the start, though. I have no idea whether my current amplifiers, pedals and whatnot will give me that sound: and in any event I'm looking to steer clear of miked-up amps and record directly into my PC with Reaper as my Digital Audio Workstation (DAW) - but that's contingent on the capabilities of my PC soundcard, so I might need to do some upgrading there too.

But that's OK. I've wanted to do this for a long time, and there has never been a better opportunity, time-wise - so I'm looking forward to getting stuck in.

When I'm not fishing.

Added: the guitar arrived while I was typing, and first (unamplified) impressions are hugely positive.

The Jatoba fretboard is - as expected -  quite pale, but I like it aesthetically: it's not figured per se but it has enough going on to be interesting, and it already looks better for the application of a little bit of oil. I'll get some boiled linseed oil tomorrow, and put a more liberal coating on to see how much darker it gets. Jatoba darkens anyway in the light (within a few days, apparently) so it'll be interesting to see where we end up.

It plays absolutely beautifully, even with the action being a bit higher than I prefer. I knew I could expect that, but the combination of a fairly flat (12" radius) board and jumbo frets is perfect for me, and the overall width of the board is just right for my hands too. I'm even OK with the gloss finish on the back of the neck, although I'm almost certainly going to flat it off with some steel wool.

Added: no, I ain't. I've flatted the neck off with wire wool and fine-grit sandpaper, and it's still ridiculously sticky. Luckily I'm a "thumb on the back of the neck" player, so I make very little contact with the gunk covering the neck, but it's not a good playing experience...

The frets might need a little bit of polishing (although I know from experience that the "scratching" sound you can sometimes here on bending a string acoustically doesn't come though an amp. But some steel wool will make 'em look prettier - I like the look of polished frets - so...)

Added: I've wire-wooled them to within an inch of their lives, and although - because they're nickel silver rather than stainless steel frets they're never going to shine - they feel glorious under the fingers now.

There is a high fret - the second fret, and mainly noticeable on the low E string at that one position (on close examination the fret actually has a filing "ding" at the bass end) - but I'll leave that for now, because I think I'm going to put heavier strings on than the stock 10-46 set. Weird, because that's my usual gauge choice, but on this guitar they actually feel a bit light. A testament to how well the neck plays, I suppose.

The top B and E strings would hang up and sharpen on dumping the bar (note that there's not a huge pitch range on this trem, but that suits my use anyway - I'm a note-dipper, not a dive-bomber!) but a dab of ordinary petroleum jelly in the fret slots has sorted things, and for a guitar with a non-slippy nut and a bent-metal string tree, and without locking tuners, it's great.

Added: Despite initial good impressions, I've been having tuning stability problems, despite not being a heavy trem user: even a gentle dip of the bar would put several strings flat, and the obvious explanations - pinching fret slots, lack of slipperiness at the nut - weren't explaining it.

So I wondered if the trem itself wasn't returning to pitch: a pull up on the bar after a dip would put the tuning back (this is an old trick long used by non-locking trem users, and I'm so used to doing it that it's in my muscle memory and happens unconsciously, which is why I was initially impressed by the tuning stability) so off with the backplate and I tightened the spring claw. Not by much, just a few mm...

And Bingo! All of a sudden, the tuning stability is rock-solid, regardless of how I use the trem.

Turns out that the G&L floating trem is really sensitive to trem spring tension, but it's an easy enough thing to fix, and  it seems to have worked really well here.

I've never had to look to trem spring tension before: it should be a self-balancing system in theory - string tension should exactly equal spring tension - but this is apparently a "thing" with the G&L trem.

Some of the nut slots are too deeply cut though - I can compare it like-for-like with the the nut and low-fret action of my Ibanez RG440V, which plays like a dream, and has a low-fret action easily twice the height of the G&L - so I'll be putting in a new graphite nut shortly.

And the standard tuners are going - replaced with staggered locking heads (these from Hipshot - which I found out after I'd ordered them don't fit the non-standard spacing of G&L machine heads, FFS...), which will remove the need for the string tree.

A small list, thankfully (although you should probably add some of the Addeds above too).

The guitar should have come with an Allen key to adjust the tension of the trem arm. It didn't. Not a problem, as I have several sets of Allen keys, so the trem arm is set up as I want it.

But the grub screw doesn't seem to want to stay put. Maybe it'll settle, but at the moment it does loosen off again, which is a pain. I like the trem arm locked in place right at my finger-tips, not hanging loose, so I'll have to figure something out. Maybe some PTFE tape around the bottom of the arm, just to give the end of the screw something to dig into?

Or not... Turns out that the nylon bushing that the grub screw is supposed to push against the bottom of the arm, is missing. Not a show-stopper, I've simply cut a section out of a suitably sized rubber o-ring, and that's working perfectly well as an alternative.

The only real disappointment is a small crack in the paint (only the paint, not the wood) at the upper side of the body's neck pocket. It's only about half an inch long, and as long as it gets no worse I'll get over it. It's a common-enough occurrence (albeit a first for me), and is actually a sign of a really tight neck/body fit, which would explain how well the guitar sustains, but on a brand-new guitar, it's galling.

An obvious (if you look - this is supposedly a signed-off quality-checked guitar, and I've owned enough Cort-built guitars over the years to know what I can generally expect) fault on an otherwise impeccably-finished body, is a let-down. And because as it turns out the guitar has come to me from The Netherlands, sending it back for a replacement is neither an attractive nor a realistic option.

I think I'll cover the crack with a little bit of "invisible" tape, just to keep it in check.

All in all though - a fantastic piece of kit, and I'm very happy with it.

Added: actually, I'm a bit disappointed by some of the niggles here. The neck is great (fret buzz and poor finishing of some frets notwithstanding), but the poorly-cut nut; the determinedly sticky neck finish; the cracked paint by the neck pocket; the missing nylon bushing for the trem - and note that I haven't even plugged the guitar in yet - have taken the edge off. But the tuning is sorted (and will be a lot better once I've got the locking machines and new nut on); and the playability is peerless in my experience, so there's still a great guitar in here somewhere, I just need to help it come out...