I mention in another post that I like a bargain when it comes to my fishing tackle.

So although I could easily have sprung for something more expensive, when the urge recently struck for a (mini) "big pit" reel (or three) - an urge triggered by this little thing, which I bet is off the same production line as the reels I chose - some searching around on the internet led me to three of these Stillwater BPX Compact reels: 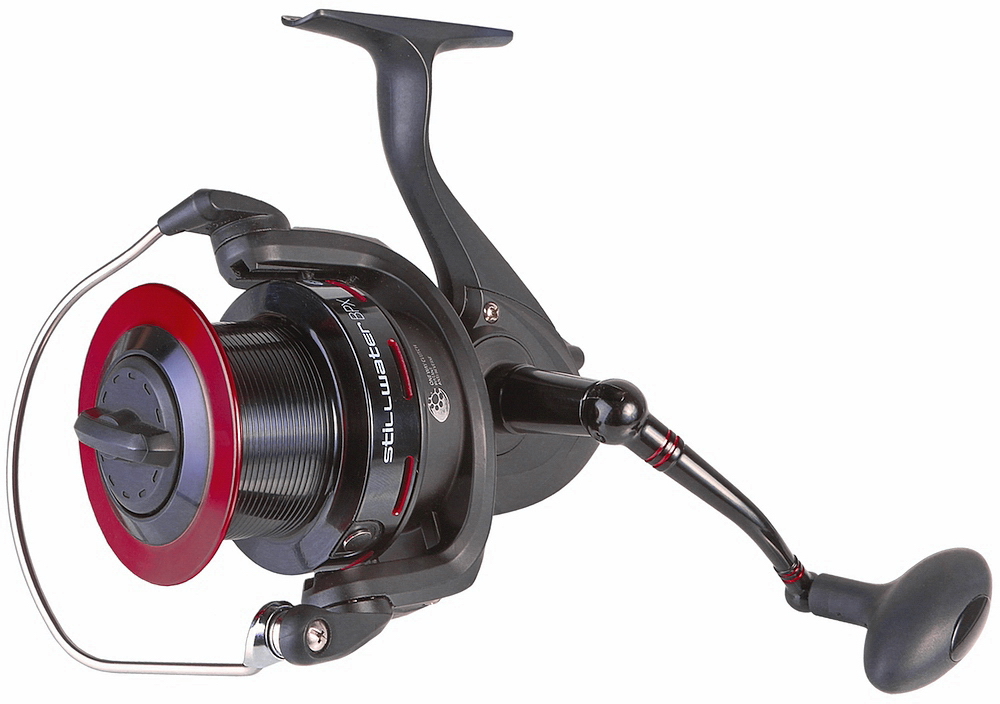 When I bought they were only £30 a pop, and they're of extremely high quality. Nothing about them suggests "built to a budget", least of all their relatively conservative appearance: the red anodisation is actually quite subdued in the flesh; but it's of a robust high quality, and clearly not just vanishingly thin eye-candy; and in any other respect the reel just looks - and feels - proper.

I should point out that the reason I picked "compact" reels rather than full-on big pit monsters, is that I don't really have the rods that would do such reels justice.

But a little bit of the casting benefit of big pit reels would give me a few more yards (and I could already get out to 100 yards or so using 8000 Baitrunners), so these reels seemed like a sensible way to increase my options without needlessly throwing money away.

And - I won't lie - I like the look of big pit reels, and the BPX Compacts look great.

I'm used to Baitrunners though, and the new reels don't have that option. Neither do they have what's called a Quick Drag - this is a popular alternative to a dedicated freespool function, and is simply(?) the ability to go from a freely-turning to a locked up spool, in less than a turn of the drag knob.

Out of the box, my reels took about 21/2 turns to lock the spool: usable, but not ideal. And I'm an obsessive dabbler...

There is actually a thriving mini-industry providing after-market parts to allow anglers to convert their reels to Quick Drag functionality, but - obviously, I suppose - nobody has created a conversion kit for this thirty quid reel.

When some of the kits cost as much as my reels, there's little margin in it for these businesses to do so, because the angler who would spend as much again to upgrade what is an unashamedly budget reel, will be a rare beast indeed. Understandable, when you can buy reels with Quick Drag for less than it would cost to buy a BPX Compact and a conversion kit, if such a thing even existed.

But like I say, I'm a dabbler, and in theory it wouldn't - I thought - be too hard to convert the reels myself.

Assuming I could find parts that would fit, of course. A harder job, as it turned out, than I'd hoped it would be...

The Google-Fu is strong with this one, though...

I took apart the drag cap and the drag washer stack of one of the reels, and was able to establish that in design terms, it was put together in a similar way to Shimano big pit reel drags. I therefore decided to replace the compression spring in the cap with a solid nylon bush; and replace the felt washers in the stack with nylon or carbon fibre alternatives.

Some deft ruler-wielding established that I wasn't going to find it easy - or cheap - to source like-for-like sized washers, so I didn't try: instead of killing myself trying to track down 20mm outside diameter/5mm inside diameter/1.6mm thickness washers, I figured that these (in the M8 size) would do: only 16mm wide, but that wasn't going to matter, I reckoned.

And so it was with the spring replacements: I needed something 8mm wide by 4mm high (ideally with an inside diameter of 5mm): M4 spacers from here seemed to fit the bill nicely. They're 5mm high rather than the 4mm of the spring: but as it turns out, that doesn't matter at all.

OK, all well and good, but does my ghetto Quick Drag conversion fix actually work?

Yep. Really well. From needing 21/2 turns of the knob to lock the reel down, I can now go from free spool to locked in about 3/4 of a turn give or take. Not as fast as the 1/2 turn that seems to be the Gold Standard for big pit reels, but it's just not a significant difference in use - it's still just one movement of the hand.

And remember - I've been able to upgrade three reels to perfectly workable Quick Drag functionality, for £4!

I did try just the washers; and just the spring replacement bush; as possible solutions in their own right (some other reel conversions work with one or the other), but it really needs both to get the full benefit.

I'm sure that there are other Stillwater BPX Compact users out there that would appreciate knowing that a Quick Drag conversion is eminently doable. In fact it's actually quite easy: all you need is a small cross-head screwdriver, and something small and fine with which to pop out the washer stack retaining spring - I used a small flat-head screwdriver for that - and a little bit of care and attention.

Note that the disassembly/reassembly processes are different (and in particular, be aware that the BPX Compact drag cap contains a tiny spring loaded ball bearing which you need to be careful with: no idea what it does, but I assume it's needed), so use a tidy, clean, well-lit workplace - ideally, organised so that anything you drop doesn't end up on the floor (I opened the drag cap inside a Tupperware box) - and make sure you open the drag cap flat.

If the ball bearing does fall off the spring, a little dab of grease on the spring will hold the bearing in place while you reassemble.

So this turns out to be a cheap and very effective upgrade. I'm really pretty chuffed about how well it has worked out.

Now then: I didn't lubricate the new washers that I put in, my thinking being that nylon has a degree of self-lubrication about it. But was that the right approach?

Well, they certainly work "dry", but I'm starting to think that a little bit of light grease or oil - or maybe graphite powder, to mimic the "selling point" self-lubrication of the carbon fibre kit washers - might be a good idea after all.

I think that graphite powder might be a bit messy, so I'm going to apply some light lubrication to the washers in one reel, and compare results.

I'll report back when I've done so...

OK, not exactly a night-and-day difference, but a thin covering of light machine oil on the washers and retaining plate surfaces seems to have improved the speed from freespool to locked, a little - down to less than 3/4 of a turn, enough that I've lubricated the other reels too.

I'm not done yet, though: I can't see any obvious reason why I can't speed the drag up even more, so I'll keep dabbling.

They're a much better fit than the washers I'd originally used, and - although there's no obvious reason why they should make a difference (my instinct is still that the thickness of the washer is the only critical metric, with internal and external diameters being less important) - the results speak for themselves. Maybe it comes down to bigger washers providing a greater surface area and therefore better-distributed drag pressure?

Anyway: I'm now getting from locked up to free (very free) spool in about a 1/2 of a turn.

This might not be ideal for anglers who still want to play fish off the drag (the earlier fix was better for that) because this is less of a normal drag now than an on/off switch. There's still some usable drag (so the safety net is still there) but it's in a very small window of adjustment now. This doesn't bother me - I wanted a fast drag, and I've always played fish by back-winding  - so I'm very happy about how things have turned out.

One thing to look out for when reassembling the washer stack: there is apparently a right way up for the retaining spring. Relocate it correctly, and the spool will move with very little resistance; put it in the wrong way, and - even without the drag knob attached - the spool is much less free-running.

So test it out before tightening things back up - give the spool a spin before you replace the drag knob, and adjust accordingly.

That said: if you're keen on resistance at the spool during a take, wrong way up might actually be the right way up for you - but for God's sake, make sure your kit is properly locked down on the bank...

Anyway, we can wrap this up. If you want to quick drag a Stillwater BPX Compact reel, now you know how.

Disclaimer: this advice is offered without any guarantee, but if you break your reel, I will happily refund every penny you paid for the advice...